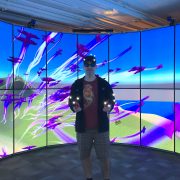 The Destiny-class Cyber-enabled Collaboration Analysis Navigation and Observation Environment (CyberCANOE) is the highest resolution hybrid reality system in the world thanks to the Laboratory for Advanced Visualization and Applications, and the Academy for Creative Media System– which co-funded it with the National Science Foundation (awards 1530873 and 1456638).

“Destiny” provides a cylindrical viewing environment similar to the CAVE2 at the University of Illinois at Chicago, which previously held the record in 2012. “However Destiny provides 3.5X the resolution of the CAVE2 with 256 million pixels of resolution in 2D and 128 million pixels in stereoscopic 3D.” says Jason Leigh- creator of Destiny who was also the inventor of the CAVE2 system while he was in Chicago.

A Hybrid Reality environment is a combination of a virtual reality environment and an ultra high resolution display room intended for group collaboration. Destiny is driven by 8 computers each with GeForce 1080 graphics cards connected to 32 OLED 4K stereoscopic displays. An optical tracking system and a surround sound system provides 6-degree of freedom motion tracking and spatialized sound.

“It’s a perfect example of the great things that can be accomplished in Hawai’i when students from different disciplines collaborate and have enough resources to do so.”- says Chris Lee, director of the Academy for Creative Media System.

Destiny took a year to build and was designed and constructed by 10 University of Hawai’i undergraduate and graduate students in Computer Science, Electrical Engineering and Creative Media. To prototype Destiny, the students used Microsoft HoloLens to virtually position the system within the space it would ultimately be placed in order to evaluate proper fit before construction began. During construction the HoloLens was used to train some of the students in constructing the physical structures that held the 32 displays together.

Destiny will be used by faculty, researchers and students to visualize data that is too large and complex to be viewed on traditional computer screens while providing a resolution that matches human visual acuity. It will also be used by Academy of Creative Media students to experiment with as a new form of digital media. 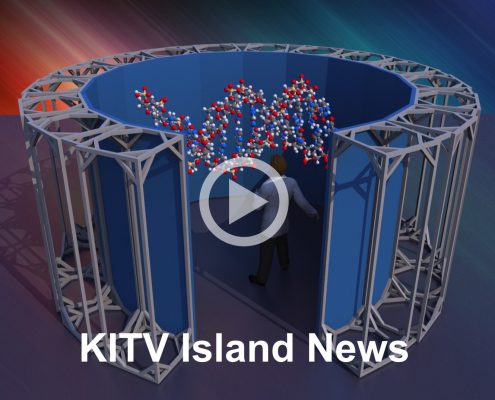