Blog - Latest News
You are here: Home / All / Awards / University of Hawai‘i Data Visualization Expert to Build the Top System i... 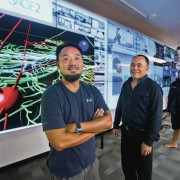 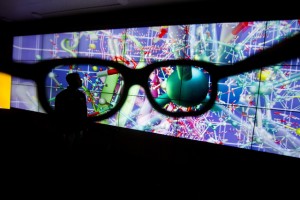 The University of Hawai‘i at Mānoa will be home to the best data visualization system in the United States, thanks to a major research infrastructure grant from the National Science Foundation (NSF).

The NSF provided $600,000 and the University of Hawai‘i (UH) added $257,000 for a total of $857,000 to develop a large CyberCANOE, which stands for Cyber-enabled Collaboration Analysis Navigation and Observation Environment. The CyberCANOE is a visualization and collaboration infrastructure that allows students and researchers to work together more effectively using large amounts of data and information.  It was designed by Computer and Information Science Professor Jason Leigh, who is also the founder and director of the Laboratory for Advanced Visualization and Applications (LAVA) at the University of Hawai‘i at Mānoa.

UH’s CyberCANOE represents the culmination of over two decades of experience and expertise for Leigh, the grant’s principal investigator, who developed immersive virtual reality environments while at the Electronic Visualization Laboratory (EVL) at the University of Illinois at Chicago- notably the CAVE2 System, which is sold commercially today by Mechdyne.

The UH CyberCANOE will provide an alternative approach to constructing ultra-resolution display environments by using new and completely seamless direct view light emitting diode displays, rather than traditional projection technologies or liquid crystal displays. The net effect is a visual instrument that exceeds the capabilities and overcomes the limitations of the current best-in-class systems at other U.S. universities.

“This comes at the best time for Hawai‘i as the number of students interested in information and computer science is skyrocketing. Last year about 170 freshman computer science students entered the program, this year we will receive 270,” said Leigh. “The University of Hawai‘iʻs CyberCANOE will give these students access to better technology than what will be available on the continent.”

The new 2D and 3D stereoscopic display environment with almost 50 Megapixels of resolution will provide researchers with powerful and easy-to-use, information-rich instrumentation in support of cyberinfrastructure-enabled, data-intensive scientific discovery.

Increasingly, the nation’s computational science and engineering research communities work with international collaborators to tackle complex global problems. Advanced visualization instruments serve as the virtual eyepieces of a telescope or microscope, enabling research teams and their students to view their data in cyberspace, and better manage the increased scale and complexity of accessing and analyzing the data.

“I’m highly excited about this multidisciplinary collaboration between information and computer sciences, the Academy for Creative Media System and electrical engineering,” said co-principal investigator and UH Mānoa Associate Professor of Electrical Engineering David Garmire.  “It will advance the state of the art in research infrastructure for information-rich visualization and immersive experience while providing unique opportunities for the student body.”

At least 46 researchers, 28 postdocs, 833 undergraduates and 45 graduate students spanning disciplines that include oceanography, astrobiology, mathematics, computer science, electrical engineering, biomedical research, archeology, and computational media are poised to use the CyberCANOE for their large-scale data visualization needs. The CyberCANOE will also open up new opportunities in computer science research at the intersection of data-intensive analysis and visualization, human-computer interaction and virtual reality.

UH System’s Academy for Creative Media (ACM) founder and director Chris Lee, who is also a co-principal investigator on the grant, said, “ACM System is thrilled to be able to continue to support Jason Leigh and his team in securing a second NSF Grant.  This new CyberCANOE builds upon the two earlier ‘mini’ CyberCANOEs, which ACM System fully financed at UH Mānoa and UH West O‘ahu.”

The new CyberCANOE, which is expected to be built in about three years, will enable Leigh’s advanced visualization laboratory to provide scientific communities with highly integrated, visually rich collaboration environments; to work with industry to facilitate the creation of new technologies for the advancement of science and engineering; and to continue ongoing partnerships with many of the world’s best scientists in academia and industry.  With the CyberCANOE, the lab will also support the country’s leadership position in high-performance computing and in contributing advancements to complex global issues, such as the environment, health and the economy.

About the University of Hawai‘i System

Established in 1907 and fully accredited by the Western Association of Schools and Colleges, the University of Hawai‘i System includes 10 campuses and dozens of educational, training and research centers across the state. As the sole public system of higher education in Hawai‘i, UH offers an array of undergraduate, graduate and professional degrees and community programs.  UH enrolls more than 60,000 students from Hawai‘i, the U.S. mainland and around the world.  For more information visit www.hawaii.edu.